At the face of it, the idea that there’s an excess of Java developers seems like a bad joke. Weren’t we just talking about the acute worldwide shortage of coders? But, a deeper look into the issue reveals why a net increase in the number of developers can coexist with an overall supply shortage.

Indeed, the number of Java coders has been expanding with some estimates giving a total of 7 million developers in the world. Both Java and Javascript are the most demanded languages and companies continue to hire remote Java developers to make up for shortages in their inhouse teams.

Since Java will continue to enjoy its preferred status in enterprise level programming given its emphasis on client-server applications, we can expect more people to take it up as a career option. But that, as we shall see, is a double edged sword.

Why are So Many Developers Taking up Java?

Java is only second to Python as far as number of jobs being posted, as of 2022. However, given its legacy status, the platform is considered more robust and tested against other new-comers. 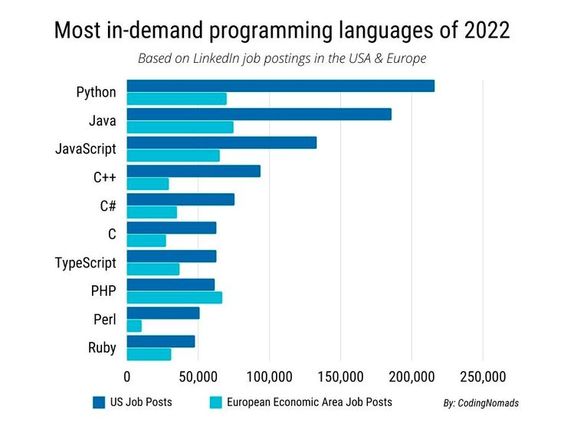 Indeed, the JDK framework is responsible for many enterprise level software infrastructure that power some of the most massive operations in the world. Investment banks, software development companies, financial institutions, and web-applications all continue to use Java for creating applications.

Besides being more mature, the language was built from the ground up to be flexible and can create applications that can run on virtually any platform, which is why Java is rightly called the “write once, run anywhere” language.

A 2021 Data and Salary Survey by O’Reilly’s revealed that while niche programming languages like Rust, Go and Scala are in-demand, more common languages such as Java continue to be both more common (read stable) and well paying. Between legacy languages, Java developers commanded the highest salary, netting an average annual income of $155,000.

Since the language presents a strong financial opportunity, many people look to learn it in hopes of striking a good offer as soon as possible. Even though newer languages are often times more paying, there is no guarantee they won’t be eclipsed or forgotten, making established languages such as Java, C++ and Python more financially lucrative.

So, Why is There a Shortage of Java Developers?

The reason for a talent shortage here is two fold.

Firstly, a potentially large salary and financial security also attracts a huge number of developers who couldn’t care less about the technology, what it represents and how it can be used to create better experiences. The industry is crowded with Java coders who only see it as a path of least resistance to a paycheck. However, their resumes and even volume of work won’t tell you that.

All legacy industries have witnessed similar problems though, and software development is no different. The primary challenge here is finding developers who are truly passionate about what they do and are invested in solving problems and helping you get results.

Secondly, the best java developers naturally gravitate towards bigger enterprises who can afford to offer large pay packages and benefits, leaving startups and SMBs with fewer high quality options. This, in essence, is why the industry is facing a shortage, even when the number of Java coders keeps going up.

Finding talent when there are so many applicants is hard enough when recruiting in house. Making sense of it if you wish to hire remote java engineers is a whole other story. Not only do you need to understand the person behind the resume without actually meeting them, but take an educated risk on hiring them.

How to Find Great Talent

A recurring hiring mistake that managers often make is they focus on how updated a candidate is rather than their history. While a coder’s current skill sets may seem more useful, their overall deliverability matters more. Consider asking how many projects the programmer has successfully completed on time, how many bugs were reported vs fixed and whether the person is a team-player.

Designing practical tests that gauge the applicant’s knowledge but also whether they are frustrated quickly, are willing to learn and can accept their mistakes can also go a long way to helping you find the best java talent out there.

Or, Leave it To Us

As an industry leader in finding great developers, we at Muoro have helped hundreds of companies create stellar teams on record time that deliver results every time. Our Engineer-as-a-Service model ensures quick developer screening and onboarding and has built in redundancy that enables replacement in case of unforeseen downtime.

We offer a free three-week trial with no strings attached. Give us a call or shoot us an email if you’d like to learn more.

Build your dream team in a matter of a few weeks with Muoro, without burning a hole into your pocket! Connect with us to know more